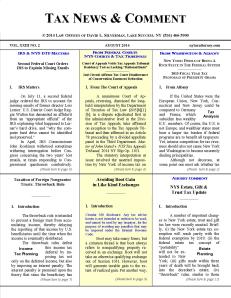 The throwback rule is intended to prevent a foreign trust from accumulating income, thereby delaying the reporting of that income by U.S. beneficiaries until the time when the income is eventually distributed. The throwback rules defeat this income tax deferral by imposing tax not only on the deferred income, but also by imposing an interest penalty. The interest penalty is premised upon the theory that since the beneficiary has enjoyed the use of the money — which would otherwise have been used to pay tax on the income had it not been accumulated — it is appropriate to impose interest for the period during which the accumulation occurred.

In addition to the income being “thrown back” to the earlier year, and interest being computed on the delay in distributing the income, another negative incident to accumulation also arises: IRC §662(b) provides in general for “conduit” treatment of amounts distributed to a trust beneficiary. However, IRC §667(a) provides (by negative implication) that capital gains are stripped of their favorable tax treatment when income is thrown back to a previous year. Thus, capital gains not distributed currently will lose their favorable tax treatment. Throwback occurs where a trust makes an accumulation distribution of undistributed net income (UNI) from earlier years. Since both elements are required to trigger throwback, by definition throwback cannot occur in any tax year in which (i) no UNI from previous tax years exists or (ii) no accumulation distribution is made. UNI may arise in unexpected circumstances. Distributable Net Income (DNI) of a foreign trust includes capital gains. In contrast, DNI of a domestic trust does not include capital gains. DNI of a foreign trust is thus increased by capital gains arising in a taxable year. If not distributed, this will result in undistributed net income (UNI) which could result in throwback if a “accumulation distribution” is later made.

The Regulations provide that the amount of taxes deemed distributed and “properly allocable” to undistributed DNI is an amount “that bears the same relationship to the total taxes of the trust for the year . . . as (a) the taxable income of the trust, other than capital gains not included in DNI . . . bears to (b) the total taxable income of the trust for such year. . .”
In a taxable year in which there is both UNI and the presence of an accumulation distribution, after determining throwback tax, the beneficiary must also determine the interest which is imposed on the throwback tax. The beneficiary must report in income for the year in which the accumulation distribution is made the sum of all years’ UNI, and the taxes allocable to the UNI, as if distributed on the last day of the taxable year.

The “simple” method provided by the Code to calculate throwback tax involves twelve rather complex steps. To summarize those steps, first any accumulation distribution is allocated to previous years’ UNI seriatim, until the entire accumulation distribution has been allocated to previous years. Then, the amounts deemed to have been distributed in an earlier year must be “grossed up” for taxes paid by the trust which are attributable to the undistributed amounts. The next steps involve a series of approximations, the result of which will yield the number of years in which throwback is applied and the increase in tax to the beneficiary for each of the “computation years.” In the final steps, interest on throwback is computed. Interest rates imposed on throwback tax can fairly be said to be confiscatory. For that reason, using the “default” method for calculating throwback may be preferable.

Use of Loan to Avoid Accumulation Distribution

While IRC §643(i) provides that if a non-U.S. settlor creates a nongrantor trust which loans cash or marketable securities to a U.S. beneficiary, the loan will be treated as a distribution, Notice 97-34 provides an exception for a “qualified obligation.” Thus, Loans made on commercially reasonable terms will not generate throwback. However, the loan must be repaid within five years, and may not be extended. Nevertheless, the deferral of tax for five years in a low-interest rate environment may be attractive.

This strategy may be useful if the trust has income not includible in DNI. If the trust has accounting (rather than distributable net) income, such accounting income may indeed exceed DNI. This situation may occur, for example, where (i) an allocation of a portion of the proceeds of a sale of unproductive or underproductive assets occurs; or where (ii) distributions are made from a pass-through entity with respect to income earned in a prior year. This exception might be the result of a statutory “glitch” that was never corrected by Congress.

Distributions of appreciated assets in kind for which the trust claims no deduction will defer the realization of capital gain by the beneficiary, and will allow more value to be distributed without exceeding DNI.